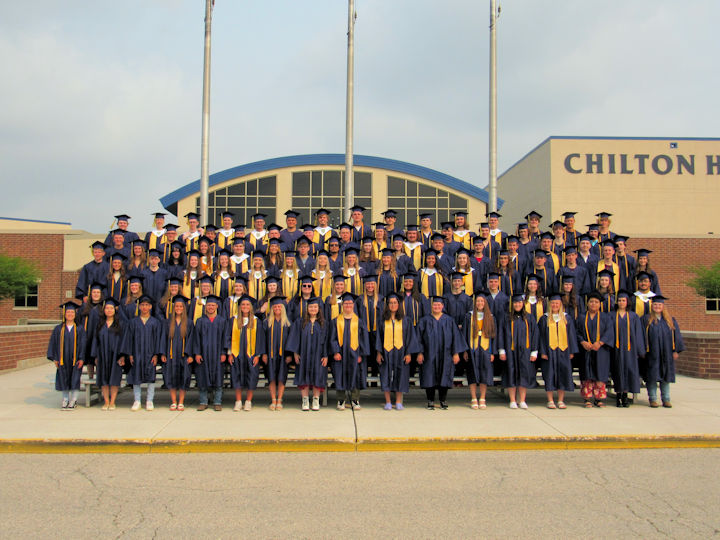 Home of the TIGERS
Welcome to
Chilton

Planning For Our Students’ Future

Since the passing of the Referendum in April 2022 planning has been taking place, a visual concept of both the interior and exterior of the Elementary has been developed. This plan/concept is the result of multiple meetings including staff, administration, community and Hoffman Group.

Planning for the Sports Complex has also been underway, with a group including: teachers, community members, Rettler Group and administrators. The visual concept continues to develop to include placement of field events as well as coloring for the field.

THANK YOU for your continued support as we plan for our Students’ Future.

JANUARY 23rd will be a full instructional day for all students. Students are to report to their regularly scheduled classes.

Monday, February 2, 2009 will be an Early Release Day for students. Students will be released according to the following schedule:

The February 2 Early Release day will take the place of the May 19, 2009 Early Release Day.  As a result of this change in schedule, May 19, 20009 will be a full instructional day for students.

In an effort to better meet the needs of the community, the School District of Chilton has developed the attacthed Open Records Request Form.  This form will also be available in the District Office for any community member or person who desires information that falls under the Wisconsin Statutes 19.31-19.36 regarding Open Records Laws (Board Policies 191.5-191.7).   Please feel free to download the attached form and email, mail or drop off the completed form at the District Office.

Updated 2008-12-06:   The Wisconsin Association Of School Boards recognized Chilton's achievement on their web site.  Click to read the article, "Chilton Applauded for Innovative Technology Use."

SACRAMENTO, Calif. - October 23, 2008 - The Center for Digital Education, the National School Boards Association and Converge Online magazine announced the winners of the nation's fifth annual Digital School Districts Survey. The purpose of the survey is to showcase exemplary school boards and districts' use of technology to govern the district, communicate with students, parents and the community and to improve district operations.

All U.S. public school boards/districts were invited to participate in the survey. Schools were placed in three categories based on size of enrollment. Winners reflected those school districts with the fullest implementation of technology standards in the evolution of digital education.

CPS Welcomes You to Speak Up

Speak Up, a national online research project facilitated by Project TomorrowSM, gives individuals the opportunity to share their viewpoints about key educational issues. Each year, findings are summarized and shared with national and state policy makers. Parents, students, teachers, and administrators are encouraged to take the survey (click here) at their convenience. Speak Up 2008 will be open through December 19, 2008.

The Yearbook Staff invites students and parents to submit photos for the yearbook. If you've got great photos of school and community events or you and your friends just having fun, we'd like to see them.

To share your photos, go to images.jostens.com and use the login ID and password found on the attached PDF.

The Chilton High School Fall Athletic Awards Night will be held on Monday, Nov. 3 at 7:00 PM. The awards ceremony will take place in the Engler Center for the Performing Arts. Letter winners will be recognized for the following fall sports: Boys and Girls Cross Country, Football, Football Cheerleading, Girls Swimming, Girls Tennis and Volleyball.